The Rise and Fall of Ziggy Stardust

Three months ago, we adopted Jedi who was promptly renamed Ziggy. Here he is, on the day we adopted him, while we were filling out the paperwork. 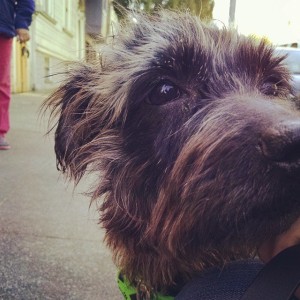 We were told he was probably two years old1, and his slight limp was probably from his horrible maltreatment or a previous injury. He was treated incredibly badly, you see. Found chained up outside, with no hair from his shoulders back due to a rampant flea infestation, he was not, shall we say, loved. Until he came to us.

He came to us and found rather too much love in the shape of the #geekling who struggled to adjust her level of affection from Labrador to fragile Terrier mix. But still, it was love.

Over time, he started to limp a little more, to walk hunched, and to occasionally cry in his sleep. The vet suggested a slipped disc, we tried anti-inflammatory medication, and that seemed to relieve a little of the symptoms, but then it came back. His gait became much more awkward and he started shuffling, so we went to a specialist who dropped him into an MRI with a view to operating to repair the slipped disc. He instead found a mass on Ziggy’s spinal cord. A meningioma, actually, but details aren’t all that important. The specialist declined the opportunity to operate and instead referred us to a neurosurgeon.

Today, the neurosurgeon operated to remove the mass. He was in surgery for around six hours but the surgeon believes she removed it all. She expressed surprise at the size of the mass, and noted that his spinal cord is not in the best of conditions. Well, whose would be after being compressed 75%. Yet again I find myself amazed at the resiliency of the dog. With half that compression we wouldn’t be walking and there he was trying to jump up on things still2.

Update (2016.01.06): Six months later, and not only is he walking and running, but he is more affectionate than he was before. I can only assume that he was in more pain or discomfort than we realised. Here’s to a lot more Ziggy in our lives.

One thought on “The Rise and Fall of Ziggy Stardust”